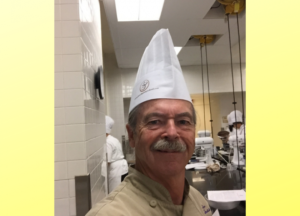 Charlie Douglass got his start in the world of confections and chocolate at the age of 9, working in his family’s candy shop on the boardwalk in Wildwood, NJ.  Growing up in the candy business, he had the good fortune to apprentice with master confectioner Christian Steiner. Later, looking to expand his knowledge, he took a job with Disney World, as assistant manager in their candy operation.  There he learned the A to Z of hard candy, making the large souvenir lollipops sold in the park. Moving west in the 70’s, he started a career at Harry and David, working in all aspects of fruit preserves, sauces, vinegars and sweet pickles.  Always looking to get back to his chocolate roots, he moved into managing their candy operation. During this time, he was able to create new candies and play with flavors, this was where he wanted to be and eventually, he became the company Chocolatier and Research and Development Manager.  During this time, Charlie was able to study with many teachers and attend numerous seminars and classes, including the Gus Palakos Candy School and the French Pastry School.
Now retired after over 50 years in the food industry, Charlie teaches classes on chocolate tempering, baking and gelato making.  He just returned last fall from a 5 week study tour in Italy and France, which included a week at the Carpigiani Gelato University in Bologna, Italy.  You can keep up with Charlie and his partner in good food and travel, Susan Tellin on their web site: lovetimepizza.net